In the MRT terminology there are two well-known acronyms LF and LMA, both claimed by two main standards the ISO4309 and the EN12927:

In this article, you will learn how to distinguish them, learning how they are created, their physical meaning and the conditions in which they work best.

The LF technology is the most ancient of MRT systems. This well-known signal measures the leakage magnetic flux, in presence of a defect on a magnetized object, such as a steel wire rope.

As it shown by the picture above, when there is a defect on a rope fully saturated, part of the magnetic field comes out from the rope, crossing the defect. This phenomenon occurs due to a gap in the rope introduced by the defect. The flux lines variates, meeting a zone (the gap) with a different magnetic reluctance. This variation will occur in the air surrounding the rope. The relative intensity and direction will depend on the entity and shape of the defect. Probes placed in a strategic position of the device will detect the flux, convert it in a voltage, finally extracting the signal.

In the following pictures it is possible to observe two examples of typical signals obtained with the LF technology.

Broken wires and corrosion can be both detected by the LF technology. It is important to remark that each signal must be interpreted by a trained technician. In the graphs there are not a real indication about the number of broken wires, the entity of the corrosion or the loss of metallic area, neither a percentage value on the axis. These results are moved on the interpretation side. A trained technician reading the diagrams can easily evaluate the rope real condition. The strong stability, the simple linearity and the reliability (no strange end effects or signal oscillations) characterize the LF signal. For this reason, the LF signal is the only signal claimed by the EN12927 test certification procedure. Without passing this test, it is not possible to operate in the cableway sector.

The LMA has been developed to provide the user a damage quantification, knowing “how much” defects (usually corrosion) affects the rope metallic section. The diagram associated to this signal is mainly given in percentage. The technician will read on the diagram a value (-2%, -5%, etc.), corresponding to the loss of the metallic section in a well-defined point. 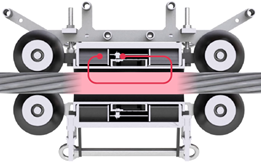 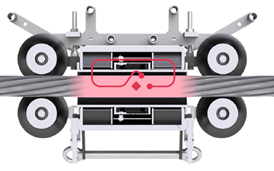 1.    The relation between the volume and the section of a rope

The real name of the LMA should be LMV (Loss of Metallic Volume). When there is a defect in a rope, there is a variation in the total magnetic reluctance. The rope can be seen as an electric resistance, its value will depend on its physical characteristics. The defect area is a zone where the iron has been replaced by air modifying the total value of the resistance. In the magnetic parallelism this phenomenon is called reluctance. The more are broken wires and/or corrosion the higher will be the reluctance, because there will be more obstacle the flow of the magnetic flux. The blue circle in Picture 3 represents the measuring point in the device for detecting flux variation.  It is possible to state that under certain hypothesis, the measured flux is proportional to the volume of defect or the rope.

Which is the relation between the volume and the section of a rope? 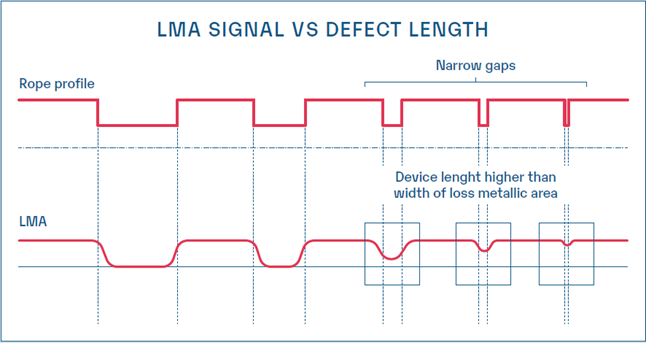 This is the reason why the LMA signal is normally used to identify ‘long’ defects, such as corrosion, wearing and so on. It is not normally suitable for the detection of broken wires. 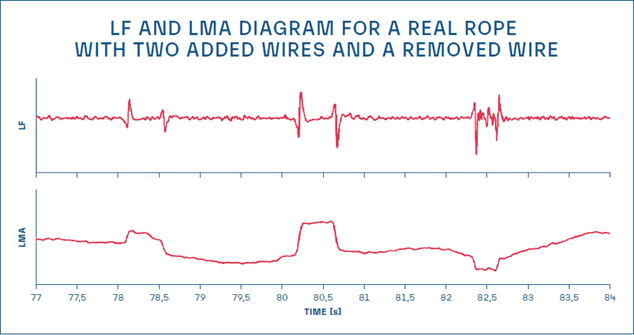 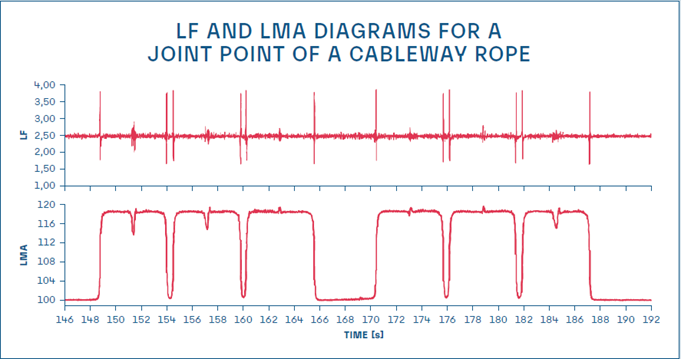 The LMA measurement is directly connected to the main flux passing inside the rope and the magnetic circuit. Any modification of the flux path can be read by the probes as a change in the rope section. This is certainly true when the flux changes due a real defect on a rope, but sometimes the magnetic field path can be distorted by some external phenomena. A clear and frequent example is the “end effects phenomenon”, which appears few meters before the rope termination. Imagine performing a test on a cableway, where the rope is a closed loop. In this case, the quantity of rope that there is on the front of the device is the same on its back. In other words, the external magnetic configuration is the same, as well the flux lines. If we perform the test on a crane, at a certain point the termination of the rope will get closer to the device and the quantity of metallic rope on the back and on the front of the system will be different. This fact will create a distortion of the flux lines that will modify the main field in the measurement point and consequently the signal.

The next picture shows an example of this phenomenon. Here the device has been manually moved on a rope, starting from the beginning (1 meter of rope on the back and 10 meters on the front) to the end (the opposite condition). As you can see the average level of the chart moves from one value to another, giving a false indication of a change in terms of section. To sum up, in this laboratory tests where defects have been created artificially close to the rope termination, it is almost impossible to read the real changes in the cross section. Why should be easier on a field inspection?

3.    Sensitive to the external environment

The LMA signal is much more sensitive to the external environment than LF. If during the test some metallic parts will move close to the system, there will be a modification of the magnetic flux lines, affecting probably the inspection result. This is one of the reasons why the device must be positioned in a free environment.

Finally, we need to remember that the LMA diagram is usually highly filtered, that will strongly by software procedures, that modifies the appearance of the diagram itself. The main advantage is a better trace provide better interpretation, but the final user should maintain the control of all the process. When closed algorithms are applied and the customer has no control on them, a dangerous situation might emerge. This is the classic situation where the user is operating well but the starting point is completely wrong, consequently the inspection.

More than 130 years of expertise and experience have lead Mennens to be marketleader in the Benelux. We have a complete range of activities: supply, install and assemble, inspect and certify, repair and maintain, inform and train.